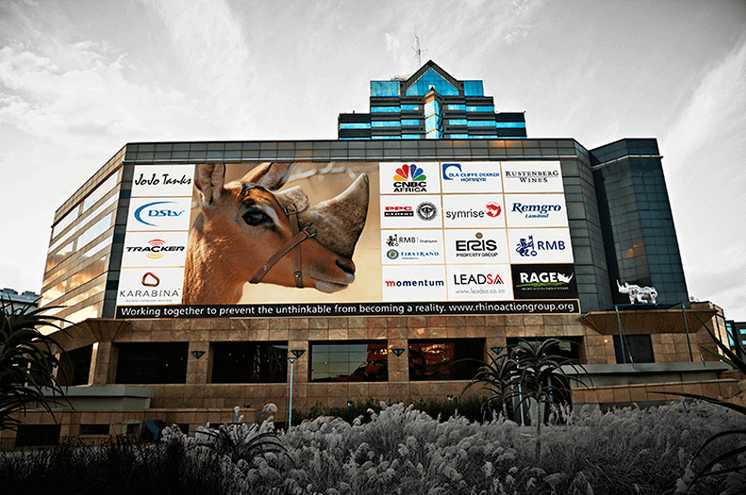 Rhino poaching has increased exponentially since 2008. South Africans, fed up with the illegal exploitation of their heritage, took matters into their own hands – LeadSA convened a Rhino Emergency Summit during 2011 and the Rhino Action Group Effort (RAGE) emerged from the resolutions adopted there. RAGE is a civil initiative that seeks to support co-ordinated efforts by several government departments, formal conservation agencies and the private sector to curb poaching. Rhinos are commodities targeted by organised crime. RAGE acknowledges that the connection of rhino poaching to other forms of organised crime may lead to widespread societal degradation. Every law-abiding South African therefore has both a responsibility and a duty to blow the whistle on rhino poaching – it helps ensures the wellbeing of society as a whole.

A small group of people comprised of marketers, television and radio producers, public communicators, lawyers, scientists, rhino owners and tourist operators volunteer their time to work intensively to achieve RAGE’s vision. RAGE wants to see rhino deaths resulting from natural causes only – and that South Africans are not caught up in the illegal trade of rhino horn and organised crime.

This is a tall order and the volunteer group has been on a mission to gain support from the private sector and government institutions. It does this by co-ordinating information, gathering funding and expertise that complements efforts by government departments and associated agencies to curb rhino poaching.

The RAGE volunteer team has also tasked itself with changing attitudes to the use of rhino horn through information and awareness campaigns. After the summit in 2011, RAGE instituted a national anti-rhino poaching reporting number to allow the public to blow the whistle on poachers and inform the Hawks,

South Africa’s Directorate for Priority Crime Investigation. RAGE also facilitated several intelligence investigations by raising and distributing R1 417 180 in support of the Hawks. RAGE representatives took part in needs analyses to assist in the delivery of a co-ordinated approach seeking to ensure rhino security. Some R2 063 524 was raised for anti-poaching units, R561 120 for training anti-poaching rangers, R925 399 for the establishment of local response team nodes (including equipment and rewards for information leading to arrests), R600 000 for operational antipoaching costs in Kruger, R77 000 for ranger wellbeing and R111 250 for the printing and distribution of crime scene support documents to assist with prosecutions. RAGE’s marketers, television and radio producers and public communicators made this possible, with outstanding fundraising initiatives allowing 95% of RAGE’s annual income to be distributed for rhino initiatives. Since its inception, RAGE has raised R8 400 000 in funding.

RAGE took on the challenge as part of the co-ordinating tasks assigned to its volunteer team that facilitated a website-based provision of trusted and vetted fundraising agents. This resulted in a government-driven NGO summit for co-ordinated fundraising activities. Of course, RAGE could not achieve any of its goals without the support of many individuals and organisations.

How did the activities of the RAGE volunteer team affect rhinos?Ultimately, it is a numbers game – a scoreboard of poached and live rhinos. Success will occur when poaching is reduced and when rhino populations grow. Integrated approaches using focused intelligence and task teams, supported through funding and expertise such as that facilitated by RAGE, can make the difference. RAGE learnt a very important additional lesson – co-ordination of integrated efforts is really hard for a civil action group. It works when government is the driver.

RAGE will continue to raise funds to support projects associated with the implementation of South Africa’s integrated rhino-management strategy, and importantly, RAGE willseek to inform South African citizens of the threat of crime, including the threat of poaching, to rhinos and the wellbeing of people.