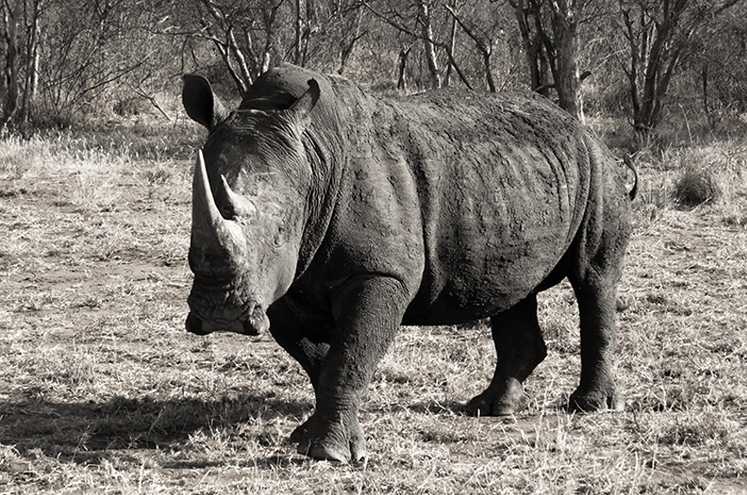 How can you, the rhino owner, help to solve the crisis? The solution is partly in your hands. At the beginning of 2013, South Africa provided a home to an estimated 21 000 (or 82%) of Africa’s 25 500 Black and White rhinos – the single largest rhino range state in the world. Namibia, Zimbabwe and Kenya collectively account for the next 16% (or 4 000 animals), making up the ‘Big 4’ rhino range states. More than 100 rhinos occur in Tanzania, Botswana and Swaziland with much smaller numbers in Malawi, Uganda and Zambia. South Africa’s estimated white rhino population of 18 900 (beginning 2013) accounted for 93% of the total African population.

The recovery of this species from its 20-50 animals left in Umfolozi in 1895 is hailed as one of the world’s conservation success stories. This recovery came about through stubborn protection in the early days. However, a number of other key inventions and developments facilitated this phenomenal growth in the White rhino population. These include:

1. The development of chemical capture in the 1960s allowed the safe capture and translocation of animals.

2. Removal of animals from what is now Hluhluwe-iMfolozi Park to other conservation areas in South Africa and elsewhere (Zimbabwe, Namibia and Kenya), including to private-sector areas that importantly spread the eggs among many more baskets. The most important strategic move was the introduction of White rhinos into Kruger National Park, which has grown to become the largest rhino population in the world. This population is now under threat from poaching, with recent estimates in 2014 putting the number at close to 9 000.

3. The introduction of trophy hunting of adult bull White rhinos started in 1968 when there were only 1 800 White rhinos. Selling rhinos at heavily subsidised prices in the early days helped encourage private owners take on surplus rhinos from parks. However, heavy hunting in the early days meant that there was initially very limited growth in White rhino numbers managed by the private sector. It was only after the first wildlife auctions in the late 1980s that rhinos began to realise their commercial market value, incentivising private owners to also bring the rhino population up through breeding. Rhino numbers and range then expanded considerably from this point.

4. The simultaneous development of more incentivising legislation (not by design!) around the ownership of wildlife saw the white rhino population grow to about 5 000 animals on approximately 400 individual properties in South Africa by 2008. This added a further two million hectares of land for rhino conservation. The South African private rhino owners conserve more rhinos than the rest of Africa protects. That said, the concern is that increasing protecting costs and risks to rhinos and people are driving numerous owners to sell their rhinos, reducing financial resources for conservation and homes for rhinos. The Black rhino population trajectory at a continental level has largely been the opposite, crashing by 95% from 100 000 in 1960 to  the lowest level of 2 410 animals in 1995. Relentless hunting, conflict with humans, habitat change, and the demand for horn by traditional Chinese medicine in South East Asia (notably China) and for horns in traditional jambiyas (daggers) in Yemen fuelled this rapid decline (Figure 2).

South Africa and Namibia largely escaped this heavy Black rhino poaching, given that these countries were internationally isolated at the time and they had generally better resourced and capacitated wildlife conservation organisations. As a result, numbers of black rhino have continued to grow from a low base. From 1995 onwards, through concerted protection efforts and a focus on improving biological management of the species, the continental population has more than doubled to reach 5 080 by early 2013. The same ‘Big 4’ Black rhino states include South Africa (40% – it had only 4% of the continental population in 1980!), Namibia (35%), Kenya (13%) and Zimbabwe (8%).

That’s the good news. The bad news is poaching is now undoing all our hard work. Where South Africa largely escaped the ravages of poaching in the 1980s, we are now at the epicentre of it. Our success has in part led to our current failure. Poaching is being driven by a complex mixture of:

• Co-operation and support by some unscrupulous South African wildlife ranchers, veterinarians, outfitters and professional hunters who have colluded with Asian nationals to make rhino horn illegally available. This continues to damage the reputation of South Africa as a responsible and innovative wildlife country. A few are undermining the success of the wildlife industry as a whole and dare I say even bringing sustainable use – a cornerstone of the South African constitution – into question by those not supportive of it for ideological reasons.

• The close proximity of Mozambique, which is awash with many poor, unemployed, trained and armed ex-combatants after years of civil war, together with an inadequate law enforcement system (although improving) that is compromised by rampant corruption.

• Increasing numbers of wealthy individuals and increasing disposable income in some Southeast Asian countries has coincided with a large increase in the price of rhino horn, fuelling poaching.

• The involvement of well-organised transnational criminal (TOC) networks has made the business of illegally trading in rhino horn into a multimillion-dollar industry. The existence of good infrastructure and communication networks makes the job of TOC that much easier.

• Declined efficiency and corruption in the South African law enforcement and conservation establishment.

So how do we save the rhino populations that South Africa has so boldly grown? The call by certain sectors in the private and conservation industry that the legal trade in horn is the perfect tonic to cure this poaching ill is simplistic. It could certainly be an important option (on top of already existing commercial value generated through tourism and limited trophy hunting) for raising revenue and incentives to conserve rhino. Demand reduction attempts in end-user states may not be successful or could take some time. It could also perhaps help save some rhino from poaching by supplying some of the existing demand without rhinos having to be deliberately killed to supply that horn.

However, legalising trade in horn will not be a single solution to the problem. Before any submission is expected to be acceptable to CITES (for which South Africa would need a two-thirds majority vote from the parties), South Africa would need to show an improvement in some basic activities, many of which in fact led to South Africa’s conservation success in the very first place. These include:

1. An improvement in the basic underlying governance of our conservation estate and law enforcement establishments. This requires us to get on top of poaching that is currently killing just over three animals a day. There have been improvements in Kruger of late. In addition, we need to clamp down on those higher-up syndicates that are trafficking and selling the horn – and that is happening too slowly. South Africa has made considerable progress in providing deterrent penalties, closing pseudo-hunting loopholes and also establishing bilaterals with China, Vietnam and Mozambique to improve co-operation and sharing of information. This need translate into positive results.

2. We need good and reliable information on rhino populations and rhino horn stocks. Sadly, we do not currently have this for over half the private rhino owners. Nor do we have reliable information on private rhino horn stocks. Moves towards a national permitting system to track rhino populations and rhino horn are encouraging but too slow. Distrust by land owners for many dysfunctional and/or corrupt government departments has plagued the provision of information in the recent past. The SADC Rhino Management Group (RMG), which has collected and collated this information thus far, relies heavily on trust in not making the raw data of properties and rhino numbers available.

The latest RMG survey (with support from the Private Rhino Owners Association (PROA)) of white rhinos on private land is attempting to update this information as South Africa builds up to CITES CoP17 in 2016. Your support with information is essential. The building of trusting relationships with some provincial authorities is beginning to pay dividends. The registration and marking of rhino horn and collection of DNA is progressing for poached and translocated animals but needs to be expanded to horn stocks and populations.

3. There is a need for greater self-regulation of professionals and members in the wildlife industry to show the world that South Africa is serious about cleaning up its tarnished image. A few are hurting the many. Wildlife Ranching South Africa (WRSA) is constantly watchful for individual game ranchers that might stray in their strict adherence to the law, and has strengthened its Code of Conduct, its Disciplinary code and Procedures, and is constantly updating its ‛Notes of Best Practice’. Disciplinary action has unfortunately been resorted to in the case of a few individuals who have not behaved according to these codes.

4. To have any chance of persuading CITES to support a legalisation of rhino horn trade, South Africa will need to provide a secure mechanism by which to trade the horn, limiting opportunities for criminals to create parallel illegal markets to launder illegal horn. In addition, we would need to reassure parties that rhino populations in non-trading states would not be under greater threat of poaching. If some private owners still continue to be uncooperative, this is just arming opponents of trade, who will simply question South Africa’s ability to control a trade if they do not even know how many animals they have and where they are. With the private wildlife industry an important part of the South African conservation success, it is imperative that every effort is made to pull together to get the conservation ship sailing in the right direction and maintain and preferably enhance the incentives to stay the long haul under very trying circumstances.

Your help in relatively small but important areas, such as the provision of population information to the RMG (which will ensure its confidentiality), and rhino horn data to the provincial authorities, will be essential.