We trust this finds you well.

As you are aware, efforts of the private and communal sectors in South Africa to conserve white rhino continue in an environment of intense poaching pressure and increasing uncertainty as to the future. The contribution of the private and communal sectors is important and has increased over the years to the extent that at least 25% (and potentially up to 35%) of white rhino in the country are currently owned by these two sectors. The graph below illustrates the growth over the years. 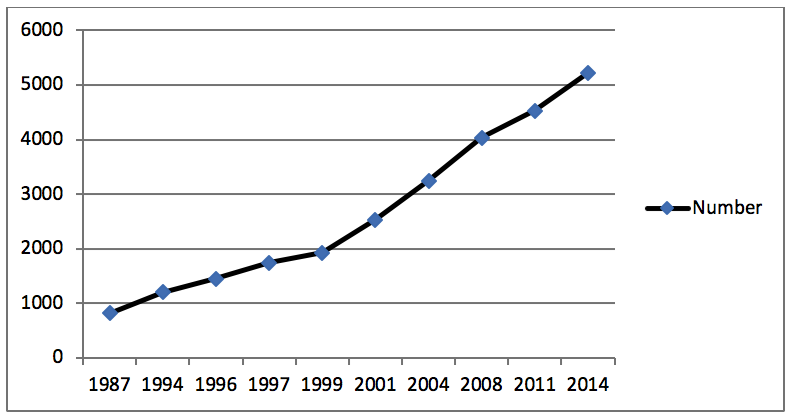 This is a remarkable conservation success story – and one we want to sustain!

Keeping tabs on the status of the country’s private and communal white rhino population is a difficult but crucial task. Knowing how many we have, how well they are growing and the perspectives of the main role players to changing circumstances is particularly important.

The Rhino Management Group (RMG) has again partnered with the Private Rhino Owner’s Association (PROA) to undertake a follow-up survey of the status of white rhino on private and communal land in South Africa as of the end of 2017. The previous survey was conducted in 2015 and has been extensively used to highlight the role of the private sector in rhino conservation nationally and globally.

PROA are assisting by distributing this questionnaire to its membership and Dave Balfour of the RMG will be collating and condensing the data so that it is not possible to identify individual properties in the report that is produced. The raw data will not be released and information will only be released in summary form (as in the graph above) with no mention of individual properties.  In the database all properties will have unique identification numbers so that no property names will be used once the data are captured.

As a property with white rhino we again request you to complete the attached questionnaire so that we can update the status of the species on private and communal land in preparation for CITES COP 18 next year. Once you have done so we kindly request you to return it to Dave Balfour at environ1@mweb.co.za.

If you do not wish to divulge your reserve details, please still complete the survey questionnaire and return it, but with no property details.

It should not take much of your time for a real benefit to rhino in South Africa.

We need the information returned to us by Monday 3 September 2018.