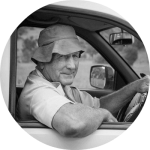 The father and icon of conservation in Swaziland, Ted has worked to conserve existing animals and reintroduce those which had gone locally extinct – thanks to his efforts, 22 species of mammals have been reintroduced to Swaziland, from the blue duiker to the elephant. He was made Counsellor of the Royal Order by King Mswati III in 1989.

Read his views on unbanning the rhino horn trade here.